Confessions of an Introverted Learning Professional: My Brief Time as Jeff Probst

Despite being an introvert, I keep finding myself in situations where I'm resisting the status quo, fighting the "system" or simply trying something that's never been done before. In this post, I describe one of the scariest, yet most gratifying engagement exercises I've ever pulled off.

In January 2012, a "something that's never been done before" urge struck me: Let's put on a team building event. Specifically, an event based on the reality TV show Survivor (since I have always been a big fan).

Here was the situation: In March, we would be holding our annual customer conference in Hawaii. Due to cost-cutting measures, this was the first year that I would not be attending the conference. But still, a significant number of colleagues from the office would be going. For those of us who would be in the office, we would experience the annual sensation of being "left behind."

In the past, maybe the folks in the office would get a free lunch one day. but that was pretty much the extent of any "we haven't forgotten about you" courtesy from upper management during the conference.

So something in me - my Intuitive Feeler (NF), coupled with my desire to constantly push the norm - had the Survivor team building idea.

I can still remember the feeling of, "OK Ken. Great idea. How the heck are you going to pull this off?"

With the blessing of my boss, and over the course of a couple of weeks, I laid out some Survivor challenges and tweaked them to the point where I felt they were pretty solid. The strategy was to set up all of the challenges in the office (so we wouldn't have to plan around the weather). Which meant every conference room would be used.

Once I had a plan, I inquired around the office for volunteers and was fortunate enough to gather a fantastic team to help. I walked the team through each of the challenges that I had designed, got their feedback, and we modified the challenges accordingly. Then we reviewed the logistics to ensure everything would work as we had it laid out on paper.

After promoting the event in the office, we ended up with 32 colleagues that we organized into 4 tribes. At the time, 32 people represented about half of those left in the office, so in terms of participation numbers, we were thrilled.

At the end of each round of competition, the losing tribe and the winning tribe, respectively, would go to Tribal Council. The Friday Tribal Council was where we asked the tribes questions about how well they communicated, what did they learn about themselves and their teammates during the challenges, and what could they improve on for the next round of competition. The final Monday Tribal Council took the "what did you learn" question deeper. But during both Tribal Councils, the dynamic in the room allowed everyone to get to know everyone else a little bit better. That was by design...it just worked a whole lot better than we had hoped for!

With those logistics firmly in place, reality hit me - when YOU have the vision, establish the groundwork and drive such an event forward, YOU (Mr. or Mrs. Introvert) are the natural choice to facilitate such an event. And truth be told, when you find yourself in this sort of situation, you really don't want anyone else handling YOUR baby - am I right?

Despite by less-than-polished imitation of Jeff Probst (that's me in the hat) and a very long, un-introverted 2.5 days, the end result was a tremendously successful (but sadly, a one-of-a-kind) event.

The colleagues that participated had a wonderful time and we got tremendous feedback and kudos from them. We ran them through some fun, sometimes aggravating and unique challenges. Each team got to go to Tribal Council - twice! And I know the volunteer team had as much fun as the participants. And to this day, Survivor still occasionally comes up in conversation.

My Takeaways For You

So what did I learn through this experience that I can pass on to each of you?

What's that idea brewing in your head or churning in your core? What are you going to do with it?

As Chief EMU Wrangler at The EMU Experience, Ken helps learning professionals deliver engaging, memorable and unexpected learning experiences. By teaching practical techniques to purposefully increase student engagement, along with methods that incorporate creativity into the design and delivery process, Ken will help you create a learning experience that is engaging, memorable and unexpected.

How Do You Greet Your Customers (When They Arrive At Your Office)?

Where Exactly Is Learning Happening in Your Company? 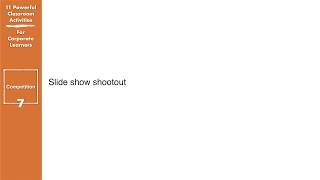 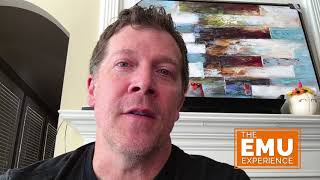 Why Training Courses Are Delivered As Presentations 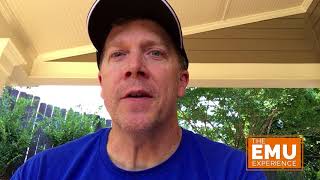 My Hands-On Clinic at the Training 2018 Conference

The Secret to Engaging and Memorable Training? Deliver The Unexpected

Are You Delivering a Learning Experience That is Engaging, Memorable and Unexpected?

3 Reasons Why You Should Play BINGO in Your Training Course

My Search for Public Training Spaces 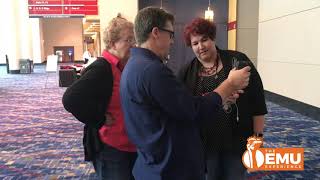 Our Video Lab at the 2018 Online Learning Conference

Blogging From Your Live Site & Mobile!

How Do You Greet Your Customers (When They Arrive At Your Office)?

Where Exactly Is Learning Happening in Your Company?

When Customers Visit Your Office, What Type of Experience Are Your Giving Them?

Our First Conference Workshop Was a Success!